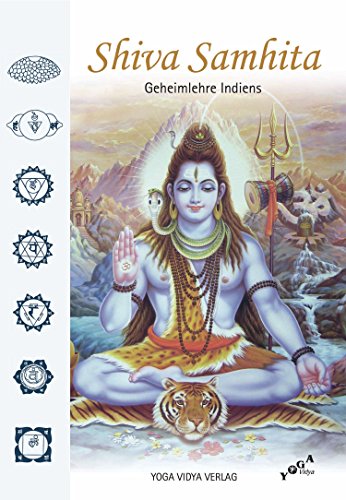 Shiva Samhita is one of the oldest books on yoga. Along with Gheranda Samhita and Hatha yoga Pradipika, Shiva Samhita is one of three major traditional books on hatha yoga. The book consists yoga asanas, mudras, bandhas, pranayama, and tantric practices. It is said to be one of the best books on yoga. The author of the Shiva Samhita is unknown. Nobody can with accuracy say who, when authored the famous book. However, many scholars claim that it must have originated around Varanasi. The book is written as a situation where Lord Shiva is explaining the secrets of yoga and many other things to goddess Parvati.

Shiva Samhita consists five chapters. Each chapter is unique to itself and deals with many aspects. Shiva Samhita is known as a yoga book however the book not only talks about yoga but many other things also. Likewise, the first chapter discuss about physiological being, how to achieve liberation, philosophy, and other things. Taking an immediate look first chapter is not what we assume is yoga.

In the first chapter of Shiva Samhita Lord Shiva describes Jnana (Gnosis). According to Lord shiva only Jnana is eternal and omnipresent. Every substance in the universe in Jnana. The variations, elements, and difference in the matter we see in the universe is due to the sense-conditions. If sense-condition were not there everything would be Jnana. When universe was born and nothing was there Jnana was present. Also, when the universe dies and becomes nothing Jnana will be there.

The first chapter goes on like this, Lord shiva describes various things. Ranging from a duty in a simple man’s life to the mysteries in the universe. The necessary things aspects, areas where one need to see, practice, and acknowledge to move further in yoga.

In our world, there are various kinds of people. They have their own ideology, gods they praise, truth they believe and deeds they perform. What is unique about them is each perception is different and unique to others. Based on what they believe to be the truth and real, they commit their karma. Some believe Karma, some are indulged in vairagya. Some believe duty is the highest of the task, some say sacrifice is. Some judge world from the perspective of good and bad, while some do not even know what is good and what is not.

Some wiser than others, are indulged in investigation and say body is temporary but soul is eternal. While, some believe the world we perceive through our senses is only real other are only imagination. All of them is their sense are right or wrong, but nobody is right in the true and completely. According to shiva Samhita, yoga sastra is beyond and the end goal what they all seek, the true and firm doctrine.

Shiva Samhita in the first chapter further explains Karmakanda, Jnanakanda, The spirit, Yoga and maya, Paramhamsa, Evolution, Involution, Jiva with their bodies. They are all the step from the creation of world to creation of them and them gaining knowledge.

In chapter 2 the book talks about nerves, nerve canters and the life within the body of a human being. In this chapter the books moves towards the yoga matters.

The mount meru, located in our body has seven islands. There are rivers, mountains, and fields.

Our body is a universe in itself. There are moon, sun, and various other aspects of universal life within us also. They are the moving energy within our body, they are distributed throughout the body. They each have their respective functions and works accordingly. Collectively they make the nerve centers around the body.

The human body consists of 3,500,000 Nadis in total throughout the body while only 14 of them are principle. Among the 14, subhumna is considered the highest by the yoga gurus.

It represents the creative force of the universe and its main objective is creation which it always keeps on doing. The goddess who is respected by all gods, goddess of speech whom speech cannot manifest.

Abdomen is the digester of food. The abdomen has a fire, the fire increases life, gives health, destroys diseases, and gives energy. The fire should be kindled with joy and daily food should be sacrificed to it.

The Jiva present in your body has the qualities of events and fruit of your karma in previous life. Every one born in this world, is happy or sad due to their own actions and their own.

Prana lives in the heart of the living beings, accompanied by past work, desires and egoism. The prana has no beginning, and is known for many names.

Guru is very important part of learning yoga. The knowledge that is acquired through guru is more powerful. A guru is father, mother, friend and even god.

Shiva Samhita describes Adhikari as the one who is faithful and with has gains complete control over himself. For anything to be successful, even knowledge there needs to be utter faith and trust.

The place is the place for retirement which is very beautiful and pleasant, then should seat in the asana made from Kush to practice pranayama. The body of the beginners should be firm and inflexible, hands joined in supplication and salute gurus on the left side.

The things to be renounced

The second and third stage

The second stage begins with the trembling of the body. The third stage involving jumping like the frog. When the practice becomes greater, the adept walks in the air.

The yogi who has gained Vayu siddhi can rise in the air and leave the ground, through remaining in padmasana. Vayu siddhi is the technique that destroys the darkness in the world.

The yogi should be gradually making him able to practice for three gharis. By performing this, according to Shiva Samhita the yogi attains the powers he desired.

Everything in universe is achievable by the sadhu who achieves Ghata(water-jar) by the use of pranayama.

After parichaya through continuous exercise the yogi enters nishpatti stage. Here, having destroyed all seeds of karma which existed from the beginning, the yogi enters immortality

There are eighty-four postures of various modes, out of them four oughts to be adopted, which are as follows:

Yoni mudra. The sacred drinks of the kalua’s

Shiva Samhita tells that the one who practices yoni mudra, is not polluted by sin either they kill thousand brahmans or inhabitants of the three worlds. By the virtue of the mudra, they are not stained by any sin.

The awakening of kundalini

When the sleeping goddess kundalini is awakened, by the help of guru then all the lotuses and bonds are readily pierced through and through.

By the mudras, per Shiva Samhita even the most unfortuniate yogis can find true suscess. These ten mudras have no equal nor there shall be. Through the practice of even one of them the person can find siddhi.

Following are the obstacles which dharma interposes:

Fickle, timid, diseased, not independent, and cruel; those whose characters are bad and those who are weak- know all the above to be mild sadkhas . With significant effort such men succeed in twelve years; them the teacher should know fit for mantra yoga.

Liberal minded, merciful, desirous of virtue, sweet in their speech; who never goes to extreme in any undertaking – these are the middling. These are to be initiated by the teachers in Laya yoga.

IV)The most ardent- Entitled to all yoga’s

Competent, talented, firm, religious, forgiving, wo keep their endeavor secret, sweet speech, peaceful, worshipers of god and guru, faithful, free from grieve, who are acquainted with the duties of adhimatra and are the practitioner of all kind of yoga – undoubtedly obtain success in three years. They are entitled to be initiated in all kinds of yoga, without any hesitation.

When the mind of the yogi is exceedingly engaged in sounds, he forgets all external things and is absorbed by the sounds.
The Anahad sounds in order are:
The sound of buzzing bee, flute, harp, ringing bells, thunder.

Shiva Samhita tells that between the Ganges and jamuna, flows this Saraswati, by bathing at the junction one attains salivation.

Above the lunar sphere, is a brilliant thousand petaled lotus. It is outside the microcosm of the body and is the giver of salvation. Its name is mount Kailash where dwells the great shiva. Who is called Naknla and is without destruction and without increase or decrease.

Sitting in the svastikasana, in a beautiful monastery, free from all men and animals, having paid respects to his guru let the yogi practice this contemplation.
Knowing through the arguments of Vedanta that the Jiva is independent and self-supported, let him make his mind also self-supported. Undoubtably by this contemplation the highest success is obtained. He who practices this always is the real yogi.