Mahabharata- The Enmity Between Kauravas And Pandavas 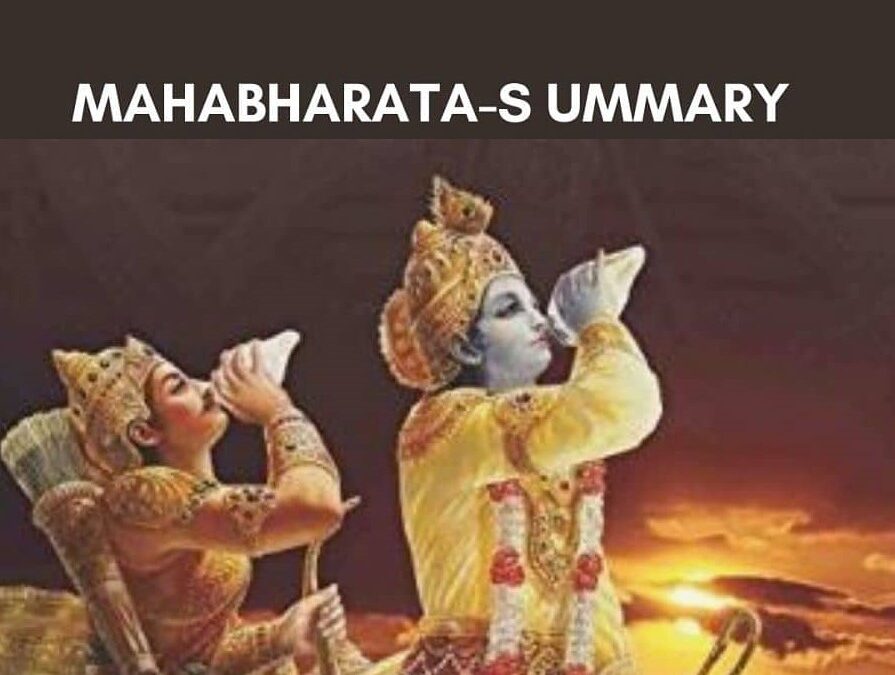 Mahabharat is one of the greatest mythological tales of Hinduism. Moreover, it is also the longest poem in the world. It alone has 200,000 individual verse lines. The story of Mahabharata is the story of cousins and brothers, which end on a devastating battle. The devastating battle is also called as Mahabharata. It describes the valor, righteousness of Pandavas, and the treachery, vileness of Kauravas. It describes Lord Krishna as the ultimate figure who will stand with those who choose Dharma in their life.

Mahabharata is remembered for the enmity between Kauravas and Pandavas. However, it also was the product of greed and arrogance of the peoples that came before them. The ancestors of Pandavs and Kauravas ruled the kingdom of Hastinapur for generations. After, generations of rulers there came the reign of king Santanu. King Santanu was a kind and loving person. He always thought of his kingdom and peoples. He had a son with Devi Ganga, named Devrat.

The kind had an affair with the Fishermans daughter Satyavati. However, when the king approached her hand for marriage he rejected. The reason was that only Devrat and his sons will in the future will rule the kingdom and the children of his daughter will be sidelined. The king loved his son so much that he decided to leave the girl and return to his kingdom.

Devrat noticed that his father was losing his efficiency in work, was getting sick and less energetic. He wanted to know the reason behind this and went to investigate. Then, he went to the house of the fisher to ask for his daughter to be wed to the king. The fisher showed the same dilemma that he had told the king. Upon hearing this Devrat took the oath of Brahmacharya and decided he will neither marry nor have children, he would be bound to the throne of Hastinapur and do what the king commands. This was the Bhisma Pratigya and from that day onwards Devrat was known as Bhisma.

Bhisma is the major character in Mahabharata. He and his oath are the reason for Mahabharata. He was known as the strongest. There was no one who could win in a fight with him. He was the student of Parshuram himself. He had the cosmic weapons, and for his Bissma oath got the boon of Icchya Mrityu. Meaning he could only die when he wanted, until then no one can kill him.

Dhritarashtra and Pandu were the grandson of Satyavati. Their father dies at the early age. Dhritarashtra was the eldest however was not given the crown for his blindness. Pandu was crowned as the king.

The Pandavas and Kauravas

Five sons were born to king Pandu Yudhisthir, Bheem, Arjun and the twins Nakul and Sahadev. At the same period, Dhritarashtra also had sons. He had 100 sons in total. His eldest was born after Bheem. Duryodhan was bigger than Arjun, Nakul and Sahadev while was younger than Yudhisthir and Bheem.
Shortly after the birth of the sons King Pandu passed away and the crown was given to Dhritarashtra.

The Kauravas always had ill feeling towards Pandavas. The vile feeling to some extent was caused by Sakuni. Sakuni was the uncle of Kauravas from the mother’s side. He wanted his nephews succeed to the thrones instead of the Pandavs. The enmity between them grew day by day. Sakuni with the Kauravas attempted to murder the Pandavs many times even in teen years but were unsuccessful every time. At one-point Pandavs faked their death and lived away from Hastinapur.

Draupadi was the daughter of kind Drupad. She has a very key role in Mahabharata. The swoyambar of Draupadi was organized. The kings of various country were invited. However, nobody was able to complete the task that had to be completed. When no one was capable, Arjun disguised as a brahmin completed the task and was about to be married to Draupadi. However, when without knowing his mother Kunti ordered it to be divided among the five brothers. Draupadi was made the single wife of five brothers.

Krishna at this point entered the tale of Mahabharata. He was believed to be the eight incarnations of Lord Vishnu. He is believed to have come to the earth to destroy the evil doers and place Dharma in the hearts of the people. He is the key person in Mahabharata

Return to Hastinapur and Indra Prasat

After the wedding Pandavs decided to return to Hastinapur to get their right. However, clash arrived at the court about the succession of the throne. Then the kingdom was divided into two, Kauravas got Hastinapur and Pandavs got Khadavaprastha.

Khadavaprastha was land not suitable for residence and was only a swamp. Snakes and other poisonous animals used to live there. The Pandavs worked hard and made Khadavaprastha the most beautiful place in the area. It was so beautiful that is looked like the city of the gods; hence the name was converted to Indraprastha. Mahabharata says that the city was so beautiful and prosperous that every king was jealous of it. The economic prosperity combined with the immense strength of Pandav brothers, became the best place to live in whole Aryavart.

Various kings were invited to Indraprastha for a function. Duryodhan was also there as the representation of his king. The city was so prosperous and beautiful that Duryodhan could not believe his eyes. His eyes became red with rage and heart black with the desire to take the kingdom from them. The palace designed by the Pandavs was a mystic one and filled with illusion. Duryodhan got into the illusion and fell into the pool of water. Then Draupadi insulted him by the mean words. Then Duryodhan humiliated returned to Hastinapur and plotted revenge against Pandavs with his uncle Sakuni.

The Game of Dice

The tampered game of dice was the main cause of Mahabharata. From here the Pandav vowed revenge and war was fought.

Pandavs were invited in the game of dice to Hastinapur. With the rigged dice Sakuni won everything the Pandavs. Left with nothing Yudhisthir put even himself and his brothers as the bait and were won by Sakuni. Then they also won Draupadi.

As the revenge of humiliating Duryodhan, Draupadi was about to be disrobed in the court at the hands of Dushasan. Draupadi prayed Krishna to save her. With his Maya lord Krishna saved Draupadi with the humiliation.

As the result of losing, Pandavs were sent to 12 years of exile in the forest and 1 year of hiding. Also, if they were found while hiding, they again must go 12 years in exile.

The Pandav, went to exile taking oath that when they will return there will be war and everyone who stood with Duryodhan will be killed. Bhim took the oath to kill all 100 sons of king Dhritarashtra himself and to rip out the chest of Dushasan and drink his blood.

After this Pandav spent 12 years in exile and 1 year in hidden, disguised as commoners in Biratnagar.

After returning from exile, Pandav demanded back their kingdom. However, Duryodhan refused. Lord Krishna standing for the Pandavs side went to Hastinapur to try peace in place of war. Arrogant Duryodhan refused and choose war.

Bhisma was the commander in chief of Hastinapur, Drona was the Guru of Hastinapur and Karna was sworn friend of Duryodhan. All three of them were the student of Lord Parshuram and were immensely powerful. No one was capable to defeat them because of their boons and weapons. Duryodhan with the power of these was so sure that they will win and choose the war in place of peace.

Lord Krishna was approached by both sides to take part in war. However, he decided not to take up arms in war. Then he decided to go in war as the charioteer of Arjun.

When the battle was about to begin, Arjun did not want to fight as there were own blood among the people he was about to kill. Then Lord Krishna gave the eternal knowledge to Arjun. That eternal knowledge is known as Geeta. It is one of the holiest books of Hindu mythology.
Yada yada hi dharmasya
Glanir bhavati bharata
Abhyutthanam adharmasya
Tadatmanam srijamy aham

Meaning when the Dharma will be in danger and evil persons will take control of earth and good peoples will be marginalized, when injustice increases and the good person will face lot of problems while trying to live their life peacefully, Dharma will be only reduced to name.

When Arjun was in the dilemma to fight, he assured that for the protection of Dharma one even must go against his loved ones. There is no supreme thing than Dharma and duty. The supreme one has given Arjun his power, abilities, and knowledge so that he could to the right thing. The right thing at that moment was to fight.

Lord told Arjun that everyone and everything in existence is part of him and he will only destroy their bodies. The soul is eternal and cannot be destroyed. They are the fragments of God which will ultimately return to them. To restore Dharma when Arjuna will be killing them, he will free their soul from the body of the sins. He will also free the people from their burdened life. Bhisma, Drona and Karna fought for their duty what they thought their Dharma was. They were forced by their duty to go against Dharma, Arjuna with his arrows will free them also.

Lord Krishna at the end of Geeta knowledge showed his Birat form. Which was superior to every god and was the only supreme being. He said he was the past, present and future. He exists within everything and in nothing. Except pure love and devotion nothing can understand or even begin to comprehend what he is.

When he heard everything from the Lord and knew the truth of existence and what his duty was, he picked his Gandiva (Arjun’s bow) and pointed his arrow at the army ahead of him.

At last, the war took place between the cousins. Whole Aryabrat was at Kurukshetra for Mahabharata taking sides they believed in.

The battle of Mahabharata was fought for 18 days. For 18 days both parties fought with all their might and valor. Many Divya Astra, cosmic weapons were launched whose destructive ability was beyond anything else.

Bhisma, Drona and Karna could not be defeated by normal means. They were just too powerful to be defeated even by the warrior Arjuna. Lord Krishna’s suggestion and indirect intervention in the war was the reason Pandav defeated all the maharathis is Mahabharata. With aid of Lord Krishna and showing the way Arjun defeated most of the strongest warrior in Mahabharata.

In the battle of Mahabharata, Bheem was the one who killed all the 100 brothers of Duryodhan. He also drank the blood of Dussahana by ripping out his chest as promised.

Both sides lost many in the war. Even all the children of Pandavs died in the war of Mahabharat. Only ten of the 3.94 million involved in the war of Mahabharata survived. Five Pandavs Yudhisthir, Bheem, Arjun, Nakul and Sahadev, Lord Krishna, Kritavarma, Sataki form the side of Pandavs. Kripacharya and Ashwathama from the side of Duryodhan survived in Mahabharata. The war ended with the death of Duryodhan. Bheem defeated Duryodhan in the mace battle with the aid of Lord Krishna.

Among the 105 princes of Hastinapur, only the son of Abhimanyu (Son of Arjun) survived as the successor of the Kurus (Name of the clan of the royal family of Hastinapur).

When the war was over Yudhistara was crowned as the king of Hastinapur. The five brothers then gave their all to restore peace and Dharma in Aryavart.