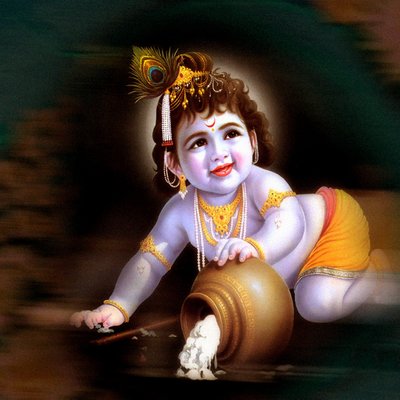 Lord Krishna is said to be the 8th avatar of lord Vishnu. Lord Krishna is believed to be existed on earth thousands of years ago. When earth was engulfed by evil, demons, asurs and good peoples were at the edge. Then, it is believed that Lord Vishnu incarnated himself as Lord Krishna. His goal to incarnate as human was to free the world of those evil elements and establish peace, and dharma.

Kansa was the evil prince of Mathura. He performed many evil works and was even acquainted with monsters and demons. However, bad cruel and demonic natured he may have been he loved his sister Devaki very much. His sister was about to be married to Vasudev. When they were married and Devaki was about to be sent with Vasudev. The sky predicted that the 8th son of Devaki and Vasudev will be the one to kill Kansa. Then Kansa fearing for his life wanted to kill even his beloved sister. However, he thought it is cowardly to kill a woman and therefore will kill his sons after they are born. Then he kept them under imprisonment.

Then Balram (7th son of Devaki) and Lord Krishna were taken as the children of Nand and Yasuda. They had their settlement in Gokul. The childhood of Lord Krishna was spent on Gokul.

Nand and Yasuda did not know that Lord Krishna was their adopted child and loved him deeply. Day after day Lord Krishna and Balram started to grow. Lord Krishna in his childhood days was known to be extremely naughty and was used to conduct various mischief. However, the whole village was enchanted by the maya of lord and none could be angry at him. Purans describe him as the most beautiful child as the mystic appearance, and enchanting ability.

In Mathura, Kansa found out that his killer somehow survived and was living in Gokul. Then, he started sending his monsters to do his bidding and kill the lord. However, every time Lord Krishna killed the demons that was sent to kill him. Putana, Shakatasura, Vatsasura, Bakasura, Aghasura are some of the demons that were sent by Kansa to kill Lord Krishna. However, they all died at the hands of the lord while trying to follow the order of their king Kansa.

Radha, the beloved of Krishna

Radha was the love interest of Lord Krishna. Lord never loved any one as much as he loved Radha. There love was so great that even when in the end they could not be together they are regarded as the symbol of love. Even today when the picture or idol of Lord Krishna is made it is made together with Radha.

Teenage years and death of Kansa

The life of lord was going as it was going in his childhood. He used to herd the cattle, play his flute, help the good person, and kill the demons. Not only the demons sent by Kansa, he killed other evil doers also. Days were passing like that in Gokul.

One day Kansa decided to kill his nephews himself as his demons could not perform the task. Instead of attacking and battling him, he devised a plan. The plan was to organize a massive tournament and inviting his nephews to watch the fight. Then during the program kill them with the fighters.

He sent his invitation, then sent his peoples to fetch the brothers. The parents and people of Gokul were very reluctant about sending the boys. However, Lord Krishna convinced them that Kansa can do nothing to them. Then Lord Krishna with his elder brother Balram went to Mathura as per the invitation.

After arriving in Mathura, Lord Krishna wanted to visit the city. Then instead if immediately going to the tournament, he roamed the streets of Mathura performing miracles. Eventually he went to the tournament. After sometime, Kansa invited him to join the tournament for kusti. Lord Krishna agreed and together with Balram he defeated the warriors. At, last Kansa himself joined the battle and was killed by Lord Krishna. Lord killed Kansa when he was just 11 years and six months old. After defeating Kansa, Lord Krishna freed his parents and started ruling the kingdom.

Mahabharat- The battle between Kaurava and Pandava

Mahabharat is believed to be one of the most devasting wars ever to occurs in Hindu mythology. 1.66 billion people did in the war of Mahabharat as per Hindu scriptures.

Mahabharat was the result of dispute between Pandava and Kauravas. Pandav were the sons of king Paandu and were five. Where Kauravas were the sons of kind Dhritarashtra. They were brothers by the relation of blood, but struggle for throne made them enemies.

Mahabharat has numerous characters, and due to their active role, the war happened. Pandav, Kauravas, Sakuni, Dhritarashtra, Bhisma, Drona, Draupadi all had their active role for leading to the massive war. However, the biggest and most significant role was of Lord Krishna himself. Without him neither the war would have happened, nor the Pandavs would have emerged victorious.

Draupadi was the daughter of king Drupad and was the princess of Panchal. Drupad got twins Draupadi and Dhrishtadyumna as a gift from gods, as they were pleased by his Yagya.

Draupadi was the wife of five Pandavas. Yudhisthir, Bheem, Arjun, Nakul and Sahadev all were her husbands. All five of the Pandavs maybe her husbands but it was arjuna who won her heart in shoyambar.

Sakuni and Duryodhan in the game of dice with their tampered dice won everything from the Pandavs. Their kingdom, wealth, palaces all were taken from them even their freedom. Duryodhan and Dushasan tried to insult Draupadi by disrobing her in front of whole court. It was Lord Krishna who saved her from her insult with his maya. Then for that attempt of misbehavior the war happened between them.

Arjun was the third son of kind Pandu and queen Kunti. He is also the son of lord Indra, that makes him a demigod. Prince Arjun is known for his beavery, valor as warrior and the strength he possessed as an archer and warrior.

Arjun from childhood was interested in archery. While every warrior from Yudhistara’s side contributed their share in war. Arjuna was the reason they won the war. In the was Arjuna defeated the power houses like Bhesma, Drona and Karna. These three warriors from the side of Duryodhan were undefeated in their entire lives. All three were so skilled in battle that people used to think they cannot be defeated. With their strength, divine weapons and boon Duryodhan was sure that they will win the war. However, Arjuna defeated them all and won the war.

Arjun met lord Krishna when he was already an adult. From the moment Arjun met the lord he was enchanted by his knowledge, strength, righteousness, and his divine charm. After, being acquainted with lord Krishna, in time Arjun became his dearest friend. Whenever Arjun faced problem in life, he went to lord for showing the right path and he always did. They were the closest, Arjuna was devoted to the lord and Lord Krishna also loved Arjuna deeply.

Lord Krishna was invited by both parties to take part in war with their side. Everybody knew how strong was he, and how powerful were his divine weapons. He told that is he were to take up arms in the war, it would end in seconds. Therefore, even if he were to take part in war, he will not raise any weapons. However, he proposed to go in war as a charioteer and they were free to choose him or his army. Then Arjuna choose Krishna and Duryodhan choose his army.

The war was inevitable, both armies were facing each other. However, at that moment arjun refused to take arms against his own blood. Then lord Krishna gave the eternal knowledge to prince Arjun. He showed his Birat and eternal form, and told he is all there is and he is the supreme being there is nothing and no one superior than him. He told Arjun the mysteries of universe, mysteries to him. This encouraged Arjun to take up the arms and fulfill his duties to the world. The knowledge and revealing that lord Krishna gave Arjun in called as Geeta. It is the holiest book in the Hindu religion.

Krishna give all these gyana (Knowledge) to Arjuna by means of different yoga style like karma yoga, Bhakti yoga, Jnana yoga and other different 18 different types of yoga in Bhagawat Geeta and talked about equanimity.

Kurukshetra was the place where the war was fought. The destructive war was fought for 11 days. The destruction of life that took place in that war was incomparable, it was too much death and sorrow. Countless divine weapons, mystic arts were used by the warriors who were involved in the war.

Lord Krishna did not directly take the weapons in his hand during the battles. However, due to his planning, illusion and suggestions the war ended in the favor of dharma. Bhisma who could die only by his free will, Drona the supreme warrior and guru of Pandavs and Karna who had impenetrable armor, all became useless due to the lords planning. Arjun defeated them all but without lord Krishna’s manipulation of the situation, it would have been impossible.

After, 11 days of war, countless deaths and destruction only the handful number of peoples survived the war. The five Pandav brothers, lord Krishna, Ashwathama, Kripacharya, Satyaki, Yuyutsu, Kritavarma and Vrishyaketu are the 12 survivors of Mahabharat. While some sources also say there were only twelve survivors.

After the Mahabharat war, Yudhisthir was crowned as the king of Hastinapur. Queen Gandhari who had lost her 100 sons in the war, held responsible Krishna for the entire destruction. With all the powers and abilities, he could have stopped the war before it even took place. He could have saved all of them from the war but he chooses war, pain, and destruction for them.

Then she cursed, lord Krishna that his Dwarika will be destroyed in civil war, his people will be killed in it and he too will be killed by a hunter. Lord Krishna graciously accepted the curse and even thanked Gandhari for that. He said Gandhari was only the medium the way of universe and supreme god made her say these vicious words.

After some time like the curse said, there was a huge civil war in Dwarika (The city of lord Krishna). In the war all the Yadav’s were killed none survived. After the war-tired lord Krishna was resting below a tree in the forest. At the same time a hunter named Jara thinking lord Krishna was a deer launched an arrow. That was the very that killed lord Krishna.

In the previous birth the hunter Jara was monkey king Bali and lord Krishna was lord Rama. He killed monkey king Bali, by hiding in the trees. Then, when by hiding in the trees. As the compensation for the previous birth Jara killed lord Krishna in the same way. This was all planned by the lord himself, the way he will leave the earth and return to Baikuntha.