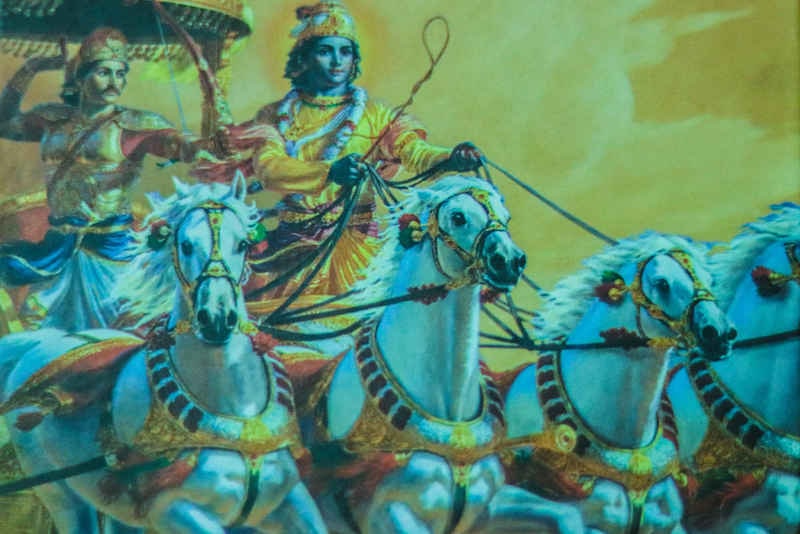 Equanimity in Bhagawat Geeta is rooted as a base. The literary meaning of equanimity is “calm mental state in all situation whether favorable or difficult” It is also said as “evenness of mind in all moment disregarding the situation like happiness and sadness”. It is the situation when the emotion ate mastered. The closer words for ‘equanimity’ could be “equable; even-tempered, dove, Pacific, stoicism, patient and uncomplaining”.

When an individual is proactive and not affected by the situation, he is said to be equanimous. The secret of developing leadership is hidden in “equanimous state”. Leadership is the function of equanimity. The Sanskrit word for ‘equanimous’ is ‘samatva bhava’ It is the psychological homeostatic and people have the ability to face, to tolerate, to endure and to absorb the world of dualities which may manifest all the time.

Bhagawat Geeta has given a great focus at equanimity. In chapter 2, verse 14 and 15 Lord Krishna says Arjuna, “The contacts between senses and sense objects, which arise the senses of heat and cold, rejoice and grief etc. are ephemeral, deciduous and fleeting; therefore, Arjuna, tolerate them. This is because the wise man to whom delight and distress are tantamount and who is not scorched by these plosives deserves for imperishability.”

Equanimity in Bhagawat Geeta provides clear idea for mental balance.  Lord Krishna keeps explaining as he was refusing to fight the war, and in the 38th verse, he says to Arjuna, “Accepting identical conquest and debacle, profit and  deficit, enjoyment and agony, get ready for war; combating  with this mental state you will not conveyance sin.”  In 48th to 51st verse, Lord says, “Adhere your works instituted in Yoga, eschewing infatuation, and be equanimous in success and failure; equanimity (evenness of mind) is called ‘Yoga’.

Action with a desire for fruit (self-interested motive) is too inferior to this in the form of singularity (equipoise) of mind. Take refuge in this equanimity; for beggarly, lousy and contemptible are those who perform an action to bear fruit. Accomplished with equanimity, one becomes distant from right and wrong, good and bad. Hereupon, endeavor for this Yoga of equanimity. Mastership and talent in action befall in the practice of Yoga (of equanimity).  For, sapient men with equilibrium and balanced mind superseding the outcome of actions and fetterless from the chains of birth, attain the jocund supreme stage.” 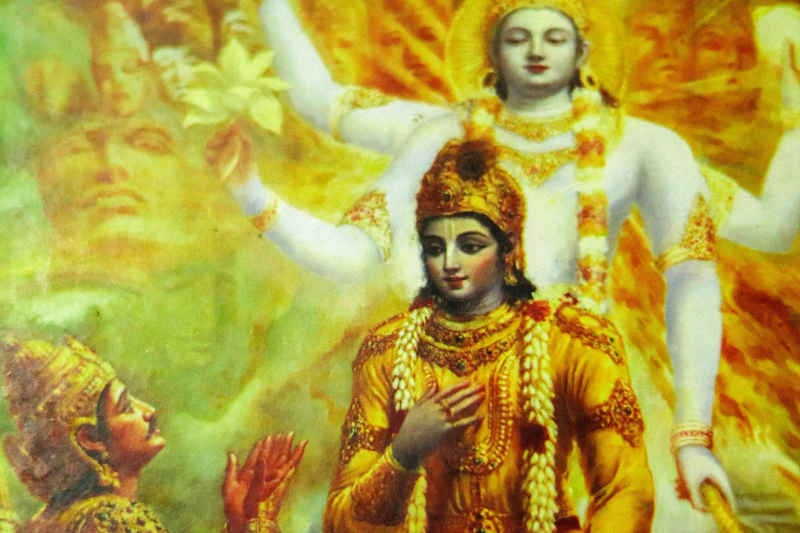 Through the conversation, in the 54th verse, Arjuna asks about the characteristics of a God-realized soul, stable or equanimous mind established is Samadhi- how such man walks, speaks, sit etc. So the Lord begins the description of such person from the 55th to 72nd verse (till the end of the 2nd chapter)-“When one completely casts off all cravings of mind, satisfies in the self through the joy of the self, he is called stable of mind or equipoised mind.

He remains unperturbed amid sorrows and thirst for pleasure is no more. He is free from passion, fear, and anger. He is unattached to everything; neither rejoices nor recoils with good and evil. He withdraws his sense from the sense objects. Who does not enjoy sense objects, they turn away from him but the taste still persists. This taste disappears when he realizes the supreme.

As attachment is not destructed, turbulent natured sense organs forcibly carry away even the mind of a wise man, who is practicing self-control. So the disciple should sit for meditation controlling all the sense, devoting himself and concentrating his mind to Lord. The man who thinks of sense objects creates an attachment for them, from attachment desire evolves. When desire is unfulfilled, it ensues anger.

Anger arises delusion, delusion creates confusion of memory, from its loss of reason, and when reason is lost one goes to complete ruin. Merely, a self-disciplined sadhak achieves serenity of mind while enjoying the sense objects through his sense, which are under control and free from likes and dislikes. Then all his sorrows end. And intellect of such harmonious minded person withdrawing itself from all sides establishes in God.

When mind and sense are not controlled, there cannot have determinate intellect and contemplation. There is no peace unless there is contemplation. And how there can be happiness without peace of mind. If any of the sense organs are attached to sense organ, that sense organ takes away his discrimination.

Thus, he whose senses are total with strained from their objects; is said to possess a stable mind. That, for all beings, is night; God realized yogi, who is in the state of Divine Knowledge and supreme bliss, keeps awake. That, which is ever-changing, ephemeral worldly happiness, in which all beings keep awake, is like a night for the seer.

He won’t be disturbed even if various enjoyments merge on him. He remains peace and won’t be hankering for such enjoyment. He who has renounced all the desires and travels being free from attachment, egoism, and thirst for pleasure attains tranquility.   Such realized soul; having reached this state he overwhelms delusion. And stable in this state, even at the final moment, he attains Brahmic Bliss.” In this way, Krishna explained equanimity in Bhagawat Geeta. Krishna wants human non-reactive due to attraction and hatred.

He suggests in chapter 3, verse 34,-“Craving and aversion are rooted in all sense-objects. A man should never let himself to be oscillated by them, forasmuch, they are two fundamental foes fixing in the path of his liberation.” Equanimity in Bhagawat Geeta is a concept to be free from all the external distraction.

In the 4th chapter, 10th verse, Krishna lays a case of people endowed with equanimity in Bhagawat Geeta,-“Entirely dislodged of clinging, fright, rage, totally absorbed in Me (Krishna), relying on Me, cleansed by the austerity of sagacity, many have unified with Me even in the former.”