The Nature Of True Yogi and  What True Yogi Follows 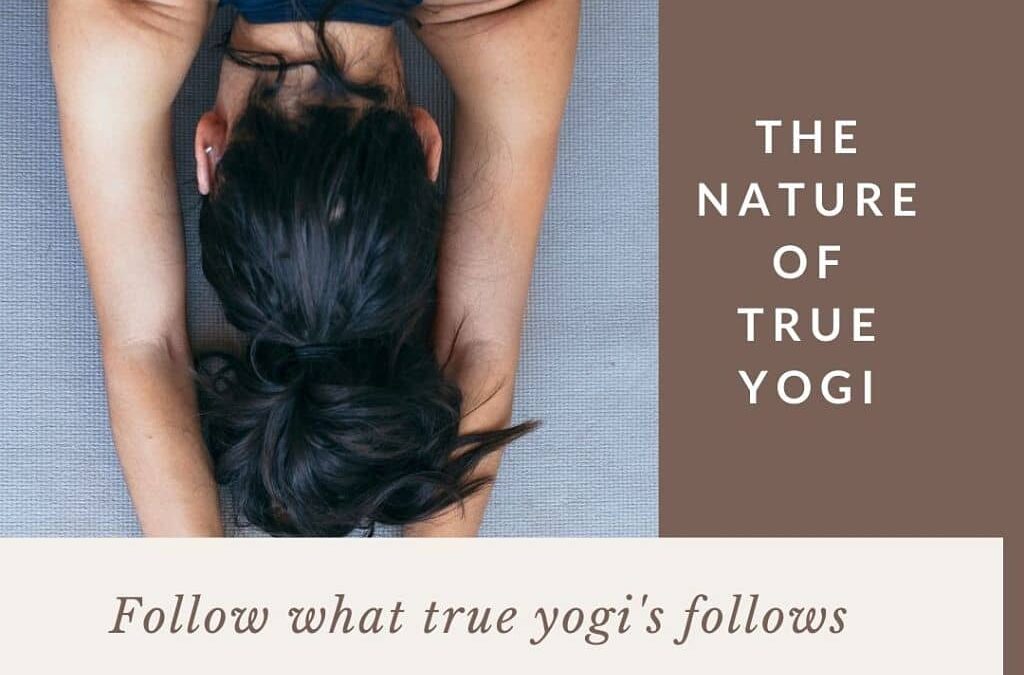 The Nature Of True Yogi and  What True Yogi Follows

Yoga is the collective set of ancient postures, breathing techniques, meditation collective as one. Today if someone talk about yoga it is what you will imagine in your mind. However, yoga is much vast and beyond just postures and technique. Now, the arts have reduced only to few breathings exercise and postures. Only true yogi has the ability to master the true essence of yoga. Without becoming a true yogi, it is impossible to master yoga completely.

Nowadays, yoga is used for physical and mental well-being. However, as per Mahaddev stated in Shiva Shamita and Gheranda Shamita, the true yogi who had mastered the yoga in the purest for will achieve god like abilities. Their body will stop ageing, fire cannot burn them, nature indulges to their commands etc. These are some of the feats of true yogi as per Mahadev.

The individual who has gone beyond the strings of the world and relations, and mastered the yoga is called as true yogi. They have grasped the same form that was bestowed upon by Mahadev himself. They are the one who have moved beyond the comprehension of normal peoples. It is said that they see the universe in new light. They see the universe and all the living creatures, non-living beings as one instead as the individual.

True yogi has some peculiar nature that they have obtained through a lot of hardships in their journey. Following are the nature of the True yogi:

This is the first character of the true yogi as described by lord Krishna. Samat Vam is the strength of mind and its stillness. The mind of the yogi should be as bright as the fire. At the same time, as in the absence of the wind the fire at the lamp remains steady, same should be with the mind of the yogi.

The true yogi sees the world in the equal light regardless the species, relative, friend all are same. They are free from all the attachments of this world. They do not expect anything from anyone and hold attachments to no one. They believe everyone alive in this universe was made from the elements of the universe and at point everyone will return to the universe. When the yogi is able to achieve this, he moves his journey to become the true yogi.

Most people in the world think their physical body is them. Few of them think that not their body but their mind is actually them. Fewer, realize that even their mind is temporary and their soul is their true essence.

Then, comes true yogi who knows their soul and their body, has established the perfect connection between them and are the true friend of their soul. Their soul is in perfect harmony, it has no inner conflict. The soul knows only peace, harmony and calmness and only desires them. They realize that the true friend which one seeks in their life is the one within us all along. The friend that lives inside never leaves, never betrays and will always be with you till the end.

True yogi has completely conquered, their mind and body. Instead of providing, mind and body they desire and being entrapped in the worldly process. True yogi goes deeper and achieve what their soul desires. Instead of getting caught in worldly matters their goal is to go beyond such and free the soul.

What satisfies you? The question if presented to an average adult he/she will make long list of materials and says they will be satisfied. However, the question is if they were to be given the things, they demanded they may be satisfied for some time but they won’t remain satisfied for long, they want more they demand more. The fact is that, even if the entire world is given to them, they want more.

What satisfies you? The question if presented to true yogi, the answer will be I am satisfied completely even I have nothing. They get satisfied with whatever they get and also if they don’t get anything. This is the nature of the true yogi. They have move past the desires, want and know only what they need. Above anything their soul is satisfied, they seek no more satisfaction from worldly materials.

The true yogi’s life revolves around the balance. Everything he does is out of balance. He does not desire anything, he has no attachments to anyone, he is not close to anyone but despite this he cannot get rid of balance. Instead, he needs to welcome balance and stability into himself and his life. Yoga is for the peoples who can achieve balance. They cannot eat excessively, nor they can reject eat or sleep completely. The true yogi balances them, not too much not too less but at the exact amount as much as is sufficient.

The walk yogi takes, the practices he does, the food he takes, the rest he needs, the knowledge he receives all need to be in balance and steadiness. Neither too less, nor too much just enough.

People are so entangled in worldly affairs in material world and in other peoples that never know themselves. Citta Yukta is the character that defines the ultimate nature of the true yogi. This says that they are complete and happy in themselves. They do not need other people or other worldly materials to be happy. They themselves can feel the true happiness.

First yoga starts as the beginner, then as the yogi start to master it various changes start to appear in the body of yogi. As, the time passes they start to feel the universe. The more immersed they become more closer they become with the universe and to the almighty. They are always in bliss, happiness within themselves because even though they appear to be far, they are closest to the god and universe. That is the source of their bliss, excitement, and happiness.

Pain and suffering are the basic nature of life. Everyone born on the earth will eventually suffer, this is the ultimate truth of the world. Rich or poor, beautiful, or not, talented, and artistic or not they will suffer, pain is inevitable. Mentally, emotionally, physically, or spiritually pain is inevitable, more than once in lifetime people must deal with one or more of them.

Everyone in this is world are in the reach of suffering, except the true yogi. They have reached beyond the grasp of pain and suffering. The pain and suffering in our life are due to the attachments, the materials we hold dear, our loved ones, love for one’s physical body, expectations, and failure.

However, true yogi are the individuals who have moved beyond material world, attachments, and needs of the physical body. This enables them to go beyond the grasp of pain and suffering. Instead of running and being afraid from pain and suffering, they embrace and accept it as a characteristic of the life.

According to Mahadev in shiva Shamita, the true yogis when watched through the eyes of the normal humans feel like watching a god. Their whole-body changes in the way that are beyond comprehension. After, becoming a true yogi the elements in the universe, move to the yogis will. They can levitate their body in air, live under water and make their body adapted to anything in the universe. These changes follow when one masters true yoga.

What abilities yoga may possess, but the true nature of yoga is healing. Yoga practice heals the individual from mental, physical, and spiritual suffering. The journey of achieving true yoga is the most demanding thing one can attempt in their lifetime. However, if they achieve the true yoga, every pain and suffering in their life will be meaningless.

Mahadev gave the secret knowledge of yoga to his wife Parvati in Shiva Shamita and Gheranda Shamita. In the books, Mahaddev has stated that the individual who have achieved true yoga, nothing in the world is impossible for them. True yogi can achieve each and every thing they wish to achieve in this world. Through, the continuous efforts of yoga and gaining knowledge, they maximize the hidden potential within them exponentially

After, achieving true yoga. The yogi’s start to see the world differently. Wheb the yogi’s talk the universe listens and when the universe responds the yogi can understand them. Nobody can be one with the universe until they have mastered the true yoga.

Knowledge is the one of the greatest gifts that humankind have received from the god. This knowledge and conscious within us is the very thing that separates us from the other animals in the world. When a yogi achieves true yogi, the knowledge within them is maximized. They get the new perception to looks at the things. They have the knowledge that are impossible to achieve to the average people.

After achieving true yoga, the mind and heart of the yogi becomes steady and calm. Regardless of the situation they will remain calm and steady. One who have conquered their desires, mind and heart can always be in their best selves. In the excited state, rage, or under pressure taken decision always tend to be harmful. If the mind is steady and calm every situation can be analyzed within the depth and right decision can be taken.

Samadhi is the perfect union of our soul with the god, the one who is the universe itself and beyond. Samadhi is the greatest happiness one can achieve in their life. The yogi who has achieved samadhi are always in the state of bliss and utter happiness. After, achieving the samadhi only they become true yogi and one with the god.