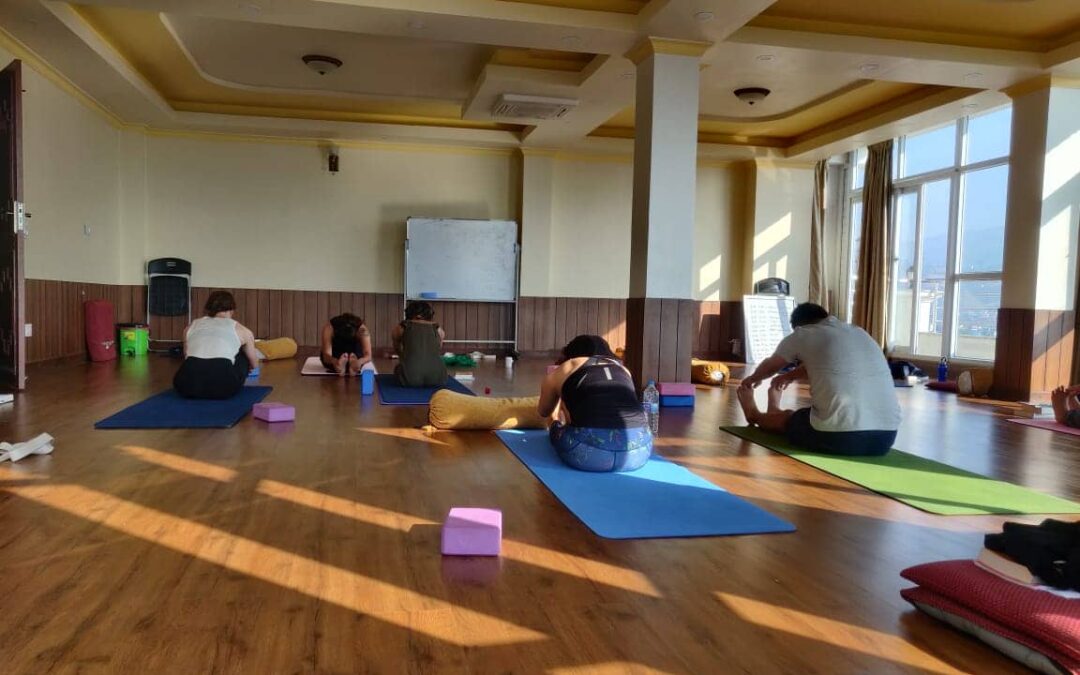 Who does not know about yoga? Yoga has become some sort of trend of the modern world. Now, from the commoners to the celebrity everybody practices yoga for their wellbeing. Yoga is a very diverse topic; one’s whole life may pass and not be enough to understand yoga completely. Various forms, variations exist as yoga is so well flourished and distributed to the various parts of the world. Various gurus and sages with research and their knowledge invented many types of yoga. Such, one type is modern yoga.

There are many yoga forms that existed in ancient times, such one was Hatha yoga. Hatha yoga is one of the ancient techniques which uses postures, breathing exercises, etc to balance the energy within the body. Modern yoga is derived from Hatha yoga. 4 Different forms of Modern yoga are described below:

Modern psychosomatic yoga is a type of modern yoga. It uses body mind and spirit training. It emphasizes practical experience, places relativity little restriction on doctrine, and is practiced in a privatized setting. The father of the modern yoga renaissance was Yogendra. He was also the one who opened the yoga institute at Santa Cruz.

Kaivalyadhama Shrimad Madhav yoga mandir samiti was founded by kuvalayananda in 1924. Then he was the one who emphasized its health benefits. Modern yoga was profoundly affected by this contribution. His goal was to revive and modernize the yoga that was sleeping in the ancient texts and scriptures. The goal was to decipher the yoga of ancient times to its core, revitalize and recreate it to connect with the present time.

In 1925 Self-realization fellowship was established in Los Angles. This was done after Yogananda moved to America. The fellowship taught yoga, breathing techniques, asanas, and postures there to everyone who was interested. The people there also got to experience the power and effect of mantra chanting. Other various institutions and schools of yoga were established in various parts due to the combined efforts of various gurus and the people who wanted to be immersed in yoga.

These yoga institutions started to modernize and enhance yoga with their knowledge and core research. However, the core and base of these modifications were still Hatha yoga its techniques and its principles.

Body-mind spirit training and emphasizing practical experiences are one of definitions of the Modern Psychosomatic yoga of Modern yoga.

Modern Mediational Yoga of Modern yoga focuses on concentration and meditation using various techniques and methods. Maharishi Mahesh Yogi in 1950’s taught a specific form of yoga to his disciple and anyone who was willing to learn from him. The same techniques were also taught later in 1964 in Sri Chinmoy’s yoga centers. The very techniques are also adopted and taught by various Buddhist organizations and yoga centers in 21th century.

Mantras are the ancient Hindu sacred words, that were chanted to please the deity or to amass huge amount of spirituality and spiritual power within oneself. There are hundreds of thousands of mantras that can be chanted. One can select the mantra they like or get it from their gurus. There is no restriction that the mantra needs to be something that pleases or signifies some god. One can create their own mantra if that is the case. They can use the words that give a sensation of peace to their mind or some verses they need to achieve or want to achieve through the meditation.

According to Modern yoga, the religious part of this meditation is based on Hinduism and if the practitioner follows Hinduism can be used to be closer to his gods. Now, for the non-religious practitioners they can skip the whole religious aspect and see it as the medium for self-improvement and development.

Modern Denominational Yoga is a form of Modern yoga that revolves around Neo- Hinduism. But first What is neo-Hinduism?
Neo-Hinduism can be very new word to many. The word is used to describe the perception and view of the gurus and leaders associated with Hinduism. It can also be understood as the side branch of Hinduism that co-exists with the main Hinduism branch and other side branches also.

In Modern Denominational Yoga of Modern yoga, the founders create their own schools and teaching centers. Each school have a specific type of teachings, beliefs and focuses on and around them. The schools have beliefs, system and even hierarchy which may be unique to all of them.

The people who follow Modern denominational Yoga are often also described as the cults. They have beliefs that may resemble Hinduism or some so distant that they even may not have the trace of Hinduism. Modern denominational Yoga of Modern yoga, also have their own way of meditation and practicing yoga. The yoga techniques may be derived from the ancient Hindu yoga, modified or even the guru may also have created it. Their nature sometime also can depict of that of the sectarian.

Brahma Kumaris founded in 1930 by Lekhraj Kripalani. Hare Krishna or ISKCON of Prabhupada, Rajneesh movement of Osho are some of the examples of Modern Denominational yoga of Modern yoga.  There are many examples of these types of organization which share the cult like behaviors and has their guru as their central figures. They are incredibly unique also compared to one another in regards of their ways and principle.

Brahma Kumaris, ISKCON, Rajneeshism and Sahaja yoga re some of the most notable organizations which differs in many ways and seeing this one can utterly understands the nature of Modern Denominational Yoga.

Brahma Kumari teaches yoga, meditation, asanas to their followers with the belief that by doing so they are moving towards the god himself. Here in Brahma Kumari, the role of gods also come into play and is the central figure of the organization alongside the guru who founded it.

Sahaja yoga on the other hand beliefs that meditation and yoga is the thing that bring s out the evolution within the human being. It focuses on Moksha. Moksha is the eternal freedom that is attained by the true awakening and gaining of the cosmic consciousness. Here, the concept of the god is not as central as the Brahma Kumaris. Instead of moving towards the god they seek the liberation they want within themselves and pursue it to gain Moksha.

Rajneeshim is on the other hand different than both in their beliefs, concepts, and ways. They prefer to live in the places that are isolated from the huge human settlements and enjoy to live life in their own ways. They use dynamic meditation and chaotic breathing to enhance their body, knowledge, and spirituality. They believe in free love that being closer to God and other aspects.

Modern Postural Yoga is the final element of the Modern yoga. Tirumalai Krishnamacharya is the father of Modern Postural yoga. He taught “A marriage between Hatha yoga, Wrestling exercise and modern wrestling gymnastic movements. “He taught all that with the will of Maharaja of Mysore in 1930s. He was the one to research the ancient techniques of yoga and connect it with the modern world. He was also the one to restart the tradition of sun salutation. He then included sun salutation in his dynamic practice.

Tirumalai Krishnamacharya instructed many students in his lifetime and when their time came, they distributed their knowledge and techniques to the various parts of the world. Pattabhi Jois, Indra Devi and the son of the guru Desikchar are some of his students. They in their time came to the lime light and further promoted the yoga and the yoga techniques.

Modern Postural Yoga of the Modern yoga is based on the postures as the name itself suggests. The most fractions consist of postures and asanas, however Modern postural yoga of Modern yoga is much more than that. There are 19 standing asanas in Modern yoga. These asanas were adapted from the ashtanga yoga to Vini yoga. Before the 1900 there were not much on standing yoga.

Standing asanas are those techniques of Modern yoga where both feet’s must be steadily touching on the ground. They are believed to be the core of Modern yoga and modern postural yoga. After the 20th century the standing yoga reach its peak as many of the new forms related to the standing Yogas were invented. Surya namaskar and the ancient gymnastic that was practiced in the ancient India is believed to be the source form where the new forms of the standing yoga are being invented.

The modern postural yoga of Modern yoga involves many things and aspects beside the standing asanas. Hatha yoga and the principles of the Hatha yoga are also the building blocks of the Modern yoga. Hatha is one of the oldest yoga techniques and classics that is still alive today in its most original forms.

Hatha yoga is the source of many yoga forms that are practices today. They are either modified with the inspiration of Hatha yoga or are directly adapted from the original source. Besides Hatha yoga Bikram yoga and the aerobics also are the inspirations to the Modern postural yoga. The Bikram yoga includes the yoga practice in the heating room with the temperature 41 degrees and has 26 asanas with 2 breathing exercises.

Modern postural yoga also contains the inspiration of other yoga forms. Lyengar yoga, which deals with alignment of postures, walking slowly and which ends with relaxation. Sivananda yoga which focuses on spirituality, meditation, and relaxation. It has pranayama exercises, and contain 12 basic poses as the base to the yoga. One of the main rules and aspect of Sivananda yoga is its vegetarian diet and healthy food. Whereas Jivamukti yoga consists of asanas that are combined with music, dance, mantra chanting and other recreational activities.

After the light of Modern postural yoga was lighted by Tirumalai Krishnamacharya, the field started growing by the efforts of the students who were taught by him. The field kept increasing and is what it is today.