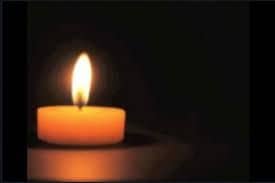 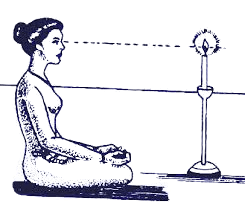 There are different types of tratak and among them, the widely used tratak are illustrated below:

There are two types of gazing practice, namely, they are external (bahiranga) and internal (antaranga).

External tratak meditation is usually practiced by gazing continuously at the single point for a longer period. For the beginners, gazing at a single point is a good practice. You can take some reference of object like moon gazing, aum symbol gazing, crystal gazing, candle gazing etc.  All above mention trataka belongs to the external trataka. You can practice anyone.

While practicing antaranga tratak, both eyes are kept closed and concentrated on a symbol, or a point of light is imagined and concentrated for a longer period. Visualization is carried out while practicing Antaranga tratak, a single point is focused continuously without thinking any other thing. It is advised to see the object clearly and steadily in the dark space of chidakasha, for a longer period without any sort of disturbance.  Both meditation techniques of trataka are very effective.

The perquisites of doing antaranga tratak are not only the vision of eyes get clear, but also the blurry thoughts are obliterated and the clear and crystal way of thinking emerges out. Antaranga can be done any time the practitioners want to; however, it is most often advised to practice on an empty stomach during the morning time.

NOTE: We can take the chakra system visualization as an internal trataka meditation. Here we visualize the colors of 7 different chakras one by one.

As the name signifies the root, chakra lies at the base of the spine, which is also known as a caudal bone. The root chakra is reddish in color. The significance of root can be compared with feeling aplomb, safety, and safe. In plants, the main function of the root is to draw the necessary nutrients, analogous to that the main significance of the root chakra in humans is also to draw power, wealth and show your wants and needs.

In this tratak Meditation we visualize the color of the root chakra,  visualize its going to be pure, all the blockage is removing and you are going to be more and more powerful. Similarly, we do for the other chakras too.

The second chakra, which comes from bottom to top, is the sacral chakra, which is orange in color. To be precise, the chakra is located just below the belly button. The sacral chakra signifies the control of your emotions, your reactions to the outer world stimulus, and the health condition of your whole body.

The yellowish colored solar plexus chakra masters your emotions, energy, power, and self-esteem. The precise location of solar plexus is between naval and sternum.

Another mystical chakra is crown chakra; it is responsible to connect the human energy with the supreme source of energy. The divinity is achieved if the crown chakra is opened.