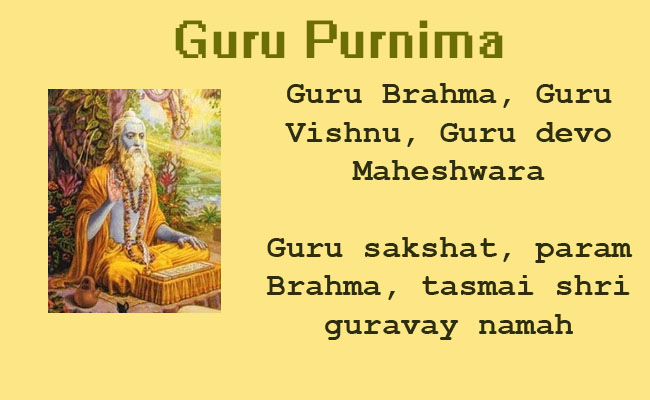 Guru Purnima is a mainly Hindu tradition that is celebrated once a year to pay gratitude to the teachers that teach us in our lives. Guru Purnima mainly lies at the mid-month of the English calendar. This year’s guru Purnima will be celebrated at 24th July 2021.

Who is a guru?

Guru is a Sanskrit word, which when translated to English means teacher, guide, the one who shoes the path. In our life, we have a large number of peoples who teaches us many things in our life.

When a child is born, after roughly about a year the parents start to teach the various things. After parents, the child starts learning from the other person near to him, the relatives, siblings, and others. Then after becoming of age the same family members start teaching the base of the academics and letters.

After becoming of age, the children are sent to the school. The school, collage, university are filled with peoples who will teach them many things in their lives. In the meantime, an individual will learn many things in his life aside from school and collages. He/she may learn driving from his parents or siblings. Take up cooking class or learn from parents. Even after completing university, they will keep learning. People keep learning till they leave this earth permanently.

So, the question arises who among this individual is the Guru? Are, only the teachers wearing tie and teaching the formal education in schools and collages gurus? Or The people who teach you the skills needed in everyday life are your gurus? Or the parents who are the first teacher and teach the basic knowledge for everything are the actual gurus?

The answer is every one of them is your guru. Every person in your life who will teach you skill, formal knowledge, techniques, big or small, great, or little everyone is your guru. There is a misunderstanding that the people who teaches in school or college are the only real teachers. Yes, they are also the gurus who enlighten us. However, they are not the only gurus. Every individual, who will teach you. Encounter with whom will make you more knowledgeable than before are your gurus.

The guru can be smaller is age than you, little in economic status, despite everything if an individual teaches you, he/she is your guru and someone who should be respected by you. And, in respect all this phenomenal individual who guided and taught you in your life time guru Purnima is celebrated. They are the individual that deserve your respect and gratitude for all the contribution that they had in your lives.

Mahadev (shiva) was the first teacher (Guru) of the world and to honor the relation between him and the students, the students celebrated the first guru Purnima.

Mahadev in his Aadi yogi form discovered yoga and meditation. He was always inclined in yoga, meditation dance and other similar activities. The techniques and such postures and activities were never seen by the people of the world. Some ignored it and keep on doing their daily activities, some were enchanted by it and kept watching him doing so. However, there were some who wanted to learn the technique and methods. They had never seen so amazing thing tin their life so wanted to learn them.

Days passed, months passed and years passed. The people who wanted to learn the knowledge of yoga from Mahaddev kept on decreasing day by day. Only handful of peoples remained from the mass of peoples who wanted to learn yoga. They were persistent enough to never go back without learning yoga. They meditated, they kept on trying to learn, and did not gave up regardless the situation.

Watching their dedication Aadi yogi decided to take them as his student. The day Mahaadev accepted those peoples to teach yoga was the day of full moon (Purnima). By accepting the students, Mahaadev became the first Guru of the world and they became the first students. Mahadev, taught yoga to the remaining seven peoples, and later in time they became the seven celestial sages. After, learning from Aadi yogi they distributed the knowledge to the world.

Sage Vyas achieved many things in his life. It is said that it was sage Vyas who created the book Mahabharata. Sage Vyas spoke Mahabharat and Lord Ganesh wrote it down. It is said that before the time of sage Vyas, Veda was one and same and people were facing difficulty understanding it. Then sage Vyas divided the one Veda into four parts. He divided Veda into four parts thus Rig, Yajur, Sama and Atharva Veda were born. For this contribution of his he was named Veda Vyas.

Sage Vyas have enormous contribution in Hindu knowledge, formation of Veda and Mahabharata. For this contribution, his birthday is also celebrated as guru Purnima. So, it is also called as Vyas Purnima.

Guru Purnima, as has a significant importance into the lives of the peoples. The importance of guru Purnima are as follows:

Highlight the role of guru and relation between teacher and student

Hindu mythology tells the relation between a teacher and student is as pure and holy as a parent and child. Guru Purnima highlights this very relation and celebrates it. A teacher passes down the knowledge that he has spent his whole life learning, countless hours dedication learning to his student. Then the student also, puts complete and utter faith in his teacher and whole heartly accepts the knowledge.

The world is what is today due to the gurus in world. Every knowledge we use, every formula invented, every invention that makes our life easier, every method of cultivation, every innovation in science, every food cooking method have been passed down through the relation of the guru and his student.

You can ask every individual that is alive in this planet about his/her guru, every person has one or more special persons who had taught them what they know. It may be life skill, the valuable knowledge of life, some scientific knowledge or even may that be an inspiration they had been taught and they had learnt. This prove that the teacher student relation will be alive and continue to go further, as long as the human race will exist in this planet.

The guru Purnima we celebrate celebrates this pure sacred relation between a guru and his student.

Guru Purnima has been celebrated in our religion and country for the thousands of years. According to the scriptures and ancient texts, even then guru Purnima was celebrated to highlight the importance of guru. Year by year it was celebrated. Now, it has become an important part of our culture that shows our tradition.

The unique way they celebrate this festival represents their culture, their way of living.
The celebration also ensures that the thousands of years old culture is still alive and will be passed on to the next generation.

Inspiration to the teachers

Guru Purnima is a festival completely devoted to the greatness and importance of teachers. This gratitude and respect in the form of festivals will inspire the guru around the world to further dedicate themselves to teaching and passing down their knowledge to the students. Guru are hardly dedicated person and work hard to teach and inspire their students. Guru Purnima recognizes their dedication, and motivates them to go further.

Inspiring teacher is one part, guru Purnima also teaches the student the importance of teachers. A student may not know what hardship a true guru goes to teaches them. Our culture in the form of guru Purnima tries to teach the children the very thing.

How is guru Purnima celebrated in different countries?

Guru Purnima is considered a Hindu festival mainly. However, what much people don’t know about it is that, Buddhists and Jains also celebrate guru Purnima to pay their respect to the teachers. India, Nepal, and Bhutan are the countries which celebrate

Guru Purnima in Nepal and India

Guru Purnima is celebrated in both countries in almost same because both are Hindu countries and have similar traditions. The students bath early in the morning, and visit the temple to worship. They worship in the temple by visualizing and worshiping all the teacher they have had in their lives in the form of god in the temple.

The adult also celebrates the festival with the same enthusiasm not just the children. The adult also visits their special teacher with sweets, spend time with them and seek their love and blessing. Also, if they are not close, they communicate over telephone or social media.

Guru Purnima is celebrated by the Buddhists with the same enthusiasm as the Hindus. However, the mythology associated behind the celebration of the festival is little bit different in the Buddhist community.

Lord Buddha was born as Siddhartha Gautam, prince of kapilvastu. He was destined to be the king and rule the kingdom or everyone thought so. However, Siddhartha thought the life of luxury and king had no meaning in the true sense. He wanted to find the truth and the universal knowledge and knew he could not do it as the king.

Lord Buddha after attaining the knowledge, wanted to distribute the knowledge to the world. To do so he first needed some disciple, who will travel various places teaching his findings. He found the five monks and asked if they want to learn from him. They also accepted with happiness.

Buddhist celebrate guru Purnima memory and honor of Lord Buddha, who gave his teachings to the five monks the same day thousands of years ago.

Buddhists celebrate guru Purnima little bit differently than Hindu. However, the goal is same, to respect the teacher and gurus. The followers of Buddha observe “uposatha” on the day of guru Purnima which means to be in peace and joy. On the occasion of Guru Purnima, the monks chant mantras in the gaumba. People offer sweet to their teachers and also help the poor peoples. People take vegetarian diet, give up smoking and drinks. Rainy season also start from this day in the Buddhist religion.