Ashtavakra Gita Summary – The dialogue between Ashtavakra and Janaka 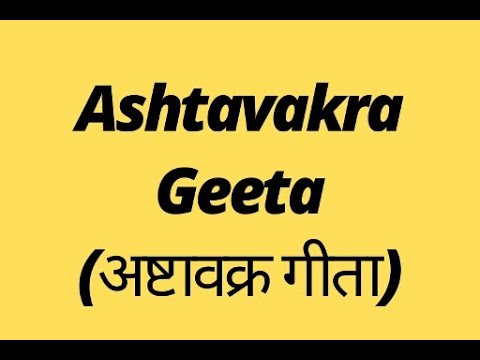 Ashtavakra Gita is one of the old books of the Hindu community. Nobody knows when and where the book of Ashtavakra Gita was written. Historians and language experts have made several attempts to know the author and the time of writing of the book but have been mostly unsuccessful to precisely account those two. Another book of the same name has been written by Sri Sri Ravi Shankar, which was published in the year 2010. However, the original author of the book Ashtavakra Gita remains a great mystery.

Ashtavakra Gita features the conversation between King Janak and Ashtavakra. Ashtavakra, his names are found in Hindu texts and scriptures, however, he is not the one to write Ashtavakra Gita. All books of Ashtavakra Gita are dialogue conversations between these two peoples. It is possible some sage had the knowledge but tried to give it more meaning and depth using the name of two great peoples. Here one is a guru, and another is a student, and they are talking about various things.

The first and the foremost thing Ashtavakra Gita does that make its class above other books on the same subject matter is that it does not set rules, boundaries, hardships one needs to perform. It is but a simple conversation between two great minds about self-realization. The conversation all from start to endpoints toward self-realization and tries to trigger it.

The conversation and the word choice of the book are believed to be so powerful that they can send the ripe mind reeling into truth.

The first chapter of Ashtavakra Gita begins when Janak asks his guru Ashtavakra about to attain Knowledge detachment and liberation? Ashtavakra replies to Janak by saying first shun the experiences of senses like poison. One needs to divert their attention to forgiveness, kindness, simplicity, sincerity, and truth. We are not the earth, fire, water, or air nor are we space. True liberation is to recognize oneself as awareness alone. One needs to focus on awareness rather than any other thing to find peace. One in their true state has no cast nor do they have the duties. They are invisible, unattached, and formless. One must witness things and be happy.

Ashtavakra Gita further tells that right and wrong, pleasure and pain only exist in the mind. We should not be concerned with them. We neither do nor enjoy them, we are free of all those things. In the first chapter, Ashtavakra Gita further describes the way to attain knowledge, liberation, and freedom through the conversation of Ashtavakra and King Janak.

After Ashtavakra describes the way, things should be to attain peace. Janak does so and immediately sees the world in a new light. Janak is an immense joy as the words of his teacher have given him the ability to see the world as it is and as it was meant to be seen. Janak says he is now spotless and is now at peace and is at a state beyond consciousness. He was duped by the illusion but now can see beyond it what was always there but hidden.

The third chapter of Ashtavakra Gita begins as Ashtavakra finds inconsistencies in the awareness that was felt by Janak. So, he further tries to give knowledge by questioning his perception and thoughts. The first thing Ashtavakra asks in the first verse of Ashtavakra Gita is that if he has realized one as the one who is indestructible and serene then why he now even desires wealth. He questions many things, like why someone who has found a true self has lust, and other things inside himself.

In chapter 4 of Ashtavakra Gita, Janak answers the questions of Ashtavakra. Janaka says that the one who is the lord of the universe can do as he pleases to do and live the kind of life that pleases him.

In the 6th chapter of Ashtavakra Gita Janaka replies to his guru Ashtavakra as he knew what his guru was teaching to him and replies with his knowledge. He says he is infinite space, and the universe is a jar. This he truly knows and understands. Which is the knowledge that there is no need to renounce, accept or destroy. He along with it gives some logic and says that his logic is not needed to renounce, accept or destroy.

Ashtavakra carefully listens to Janak in chapter 6 and chapter 7 of Ashtavakra Gita. Then after listening he tells his student that in his knowledge and logic there is an abundance of me. This implies that he still is not able to completely let go and still holding to some. Ashtavakra first defines the forms of bondage and links it to the I word that Janak used in their conservation.

In chapter 9 of Ashtavakra Gita, the guru Ashtavakra again tries to instruct Janak where the mistake is and how to attain true detachment. He said Janak to be like the primal element, which even in this myriad universe with countless forms and things remains alone with detachment. He tells his student to attain detachment and attain his true nature by escaping the illusion.

Ashtavakra further enlightens his student Janak in this chapter. The guru Says the desire should be cast away from one’s mind no matter how elevated or subtle is the desire of the person. In this chapter of Ashtavakra Gita, he not only tells desire is the enemy, but prosperity is also which is born of mischief or even good work also. Be indifferent to all these things. Be firm, free of desire, and be happy.

In this chapter, Ashtavakra further defines desirelessness which will attain detachment. He further describes all things that exist in three forms, existence, non-existence, and change which are the nature of everything. After which serenity, stillness and bliss will follow. One who truly understands this nature “Self creates all and is alone” becomes still, desireless and unattached. In life the one who understands adversity and success comes and goes which leads to destiny. He neither desires nor grieves. One who understands that birth and death, happiness and misery, come and go concerning destiny, neither desires nor grieves.

With knowledge like these Ashtavakra tries to teach Janak various things and situations.

Janak when got the knowledge of stillness, now in this chapter of Ashtavakra Gita describes the state of stillness he is in and shares his experience with his guru. He says no sound or action, or other sense perceptions can get his attention and disturb him from the state he is in now. His mind is free from everything, unattached, undistracted, and focused on a single point. Now kind Janak has nothing to reject, nothing to accept, no joy, no sorrow. Then he bows to the lord saying there he is.

Janak continues to describe his state to the guru who taught him many things. Ashtavakra his guru had asked Janak to be happy at the beginning of the conversation of Ashtavakra Gita, Janak replies to his Guru that he indeed is happy and feeling bliss. Now achieving the state of unattachment he has nothing to gain or lose by standing, walking, or sitting down. So, the weather stands, sits, or is walking, it does not matter as he is happy. Janak further describes his guru as why he is happy and is in a state of bliss in the 13th chapter of Ashtavakra Gita.

Janak now describes his exalted state without being indifferent. Now, Janak is indifferent to everything and is expressing his experience. He says that those who are in that state seem that they are in a state of rest, as their body is resting. Their mind has been emptied by all the attachments. It seems as they are resting and not awake, but in the true sense only they are the ones who are truly awake in the world. He already has realized the supreme self and witnessed the one. Indifference is attained by him. To him, freedom and bondage are the same it does not matter anything to him.

Ashtavakra is impressed by what his student has attained and what he has taught but he still is not through him and tells him more. Aversion from the world and worldly desire is the only way to achieve liberation. When one gets attracted to worldly matters, he will be grasped by desires. One who is grasped by those things can never escape its bondage and forever stay away from true liberation and happiness. Ashtavakra now points to the vast emptiness of self.

In this chapter also Ashtavakra teaches Janak who is his student. In this chapter of Ashtavakra Gita Ashtavakra describes the futility of effort and knowledge. According to the guru, one can read the texts, books, and scriptures all to the fulfillment of the heart. However, until they drop everything, they never will know the truth. One can enjoy learning, meditation, work, and all the things life has to offer but there is still the state which is beyond that, and everybody even subconsciously tries to achieve that fulfillment desire. That state is only achieved when all the desires are extinguished.

In this chapter also Ashtavakra is teaching king Janak. In this chapter of Ashtavakra Gita the guru Ashtavakra tells Janak a hundred verses of knowledge. These all verses explain Janak’s pure-non duality. All these verses are the source of very high knowledge, which in the true sense frees people from all the desire and attachment in the world. Ashtavakra here gives all his knowledge to Janak in the form of these verses.

Janak in chapter 19 of Ashtavakra Gita has truly attained what his teacher tried to teach him and what Janak himself hoped to achieve. His answer and knowledge are not half or almost complete which were still impure with the tiny fractions of desire and attachment. Janak expresses his thoughts like this, with the tongs of truth I have plucked the thorn of thinking from the innermost cave of my heart. Now, he is feeling nothing, he sees nothing, neither past, present, or future. He does not know space or eternity. He sees no good, no evil, no confusion, and no clarity. Janak in this chapter further describes to his teacher how he truly feels.

Chapter 20 is the final chapter of Ashtavakra Gita. This chapter also Janak describes the true state of bliss and happiness that he had achieved. Now, Janak let go of the last binds that he has with the world. He breaks every tie, relation, everything that he had till now towards which he is indifferent to now. The personhood of Janak disappears and he truly enters the stage of dissolution.

Janak ends his conversation with “No more can be said” to which Ashtavakra replies no more.