Jain meditation Given By Mahavir 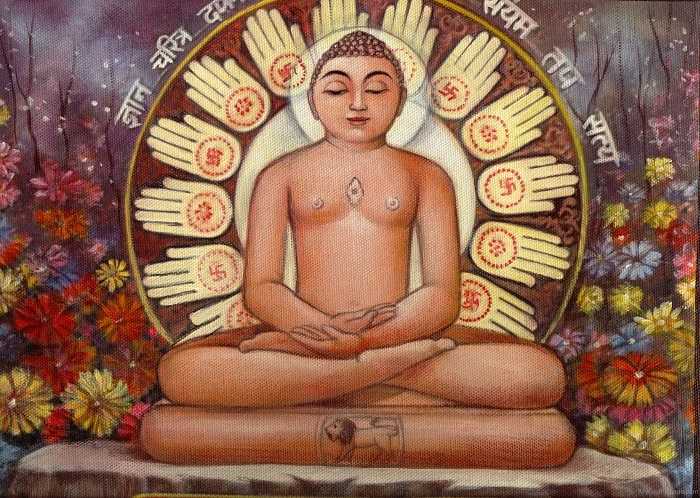 Jain meditation Given By Mahavir

Lord Mahavir has achieved the divine state through meditation and unfolded many secrets in Jain meditation.

The way to meditate in Jain meditation by Mahavir

First one needs to sit firmly and fix their vision at the tip of the nose while stretching both of the arms gently. Now, put the eyes in the semi-closed position. Normally, either we close our eyes or open them but during Jain meditation by Mahavir, we semi-open the eyes where they are half-opened and half-closed.

When our eyes are opened, we are aware and conscious of our surroundings and respond to their work and live in it. However, when our eyes are closed, we are in a state of rest, we regain our energy and are not aware of our surroundings. However, their state is the state of meditation as per the Jain meditation where there are qualities of both of the states. One is aware of the surroundings with the half-opened eyes while the half-closed eyes give a sense of rest and relaxation.

A relaxed body is another integral part of the Jain meditation as per Mahavir. The body should be as relaxed as it should be a feather that is floating through the air.

To achieve perfection in this form of Jain meditation, Mahavir took various aspects and let us look at the ways he followed to enhance his meditation:

Mahavir accepted all kinds of food that is considered edible by a monk. Yes, he fasted for some time, even days sometimes, but he never completely gave up food and ate when he felt his body required food. He went on to practice meditation and yogic principles for 12 and half years. While converted to days it becomes 4515 days, among those days it is believed that he only ate for 341 days and on other days he took complete fasting.

According to Mahavira one needs only enough sleep, and more sleep is not ok. He had gained a complete victory over his sleep. He was never in a deep sleep and only slept as much as he needed, no more than that. He never vowed to get rid of sleep but accepted sleep as equal to medicine, neither more nor less just of the right amount.

Mahavira also practiced silence of speech during his Jain meditation. Our speech is a powerful tool. It is so powerful that it can create wars and also end them. Mahavira knew the power of speech and was also controlled by accepting the practice of Mauna during the mediational and yogic processes.

Posture is also an important element in meditation. Various meditation techniques belonging to various civilizations have several postures. These postures also change according to the goal of meditation as well as the type of energy that is going to be channeled using it. Katotsarga, Utkutasan, Virasana, and Goduhi kasana are various meditation postures that were used by Mahavir during practicing his form of Jain meditation.

Mahavir always resided at the edge of the city and villages and never at the center where there were a large number of people. According to his teachings Jain meditation place also deeply impacts the meditation and yogic practices. When a place is connected with nature and possesses the elements of nature, it will enhance yoga, yogic activities as well as meditation. He did not settle in one place and was on move, but he was not also in constant motion and stayed for some time in one place.

Independence is truly needed and not just in Jain meditation. Mahavir was truly independent in every sense. He avoided big cities and settlements because their people would help him in every way. According to him, one needs the power of independence and self-reliance to find the truth. According to stories not only the humans but gods also offered their help to him, but he rejected them every time. One time even the king of heaven Lord Indra offered his help and assistance, but he rejected him and remained independent in his life.